Frictionless Shopping is the Future

A computer vision startup aspired to bring smart, frictionless grocery shopping to established supermarket brands using edge AI technology. With investment from established backers, a cogent business plan, and their own proprietary software, the company piqued the interest of one of the world’s largest food retailers, based in the UK. The company chose AAEON’s BOXER-8222AI to power their system, to great success, and the company has subsequently continued to expand operations to a number of retail stores in other countries across the world.

Edge AI technology is not necessarily unchartered waters in the retail sector, with some of the very largest companies embracing vertical integration and opening flagship, automated, smart stores where goods are sold without the need for checkouts or cashiers. Amazon most prominently introduced the concept of cashier-less shopping to the public with Amazon Go in 2018.

However, what differentiated this expansion from what the computer vision startup planned was that the startup wanted to integrate new, edge AI applications into the architecture of existing retail stores, rather than build automated, cashier-less stores with the intention of them being frictionless from the outset. 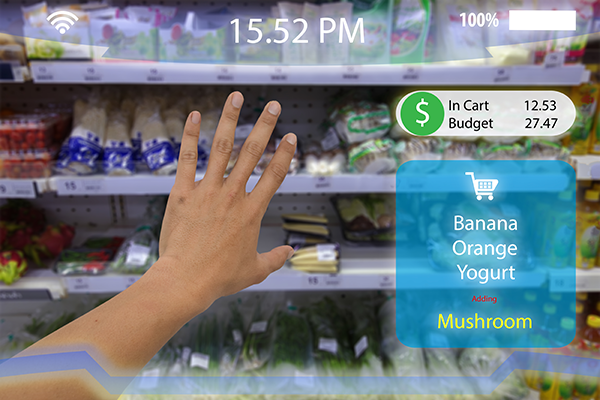 Despite the introduction of online grocery shopping, ‘scan as-you-go’ devices, and self-service checkouts, there is one facet of the supermarket experience that has yet to be fully innovated – queuing up and paying for your items. While self-service checkouts are now commonplace, their mode of operation does not differentiate from the traditional cashier model enough to prevent them from suffering from the same inefficiencies. It is at the point when customers have selected their items and are preparing to pay for them that bottlenecks arise. Despite the best efforts of planning, queues undoubtedly form at a time when personal space is not only at a premium, but a requirement due to anti-epidemic guidance.

No Queues, No Problem

By choosing the BOXER-8222AI to power the multinational supermarket chain’s smart retail application, the computer vision startup was able to completely eliminate queuing as a part of consumers’ shopping experiences. With this application, customers enter the store, scan a QR code via the supermarket chain’s app, through which they have a payment method connected. Once inside the store, customers simply select the items they want, and then walk out of the store with them.

The BOXER-8222AI is capable of processing several high-resolution images simultaneously, analyzing these images through the powerful inferencing models of the NVIDIA® Jetson Nano™. Alongside the computer vision startup’s own software, the visual data collected by the BOXER-8222AI-connected USB cameras could be examined in real-time, determining the identity of each item and adding the cost to the customer’s subtotal. 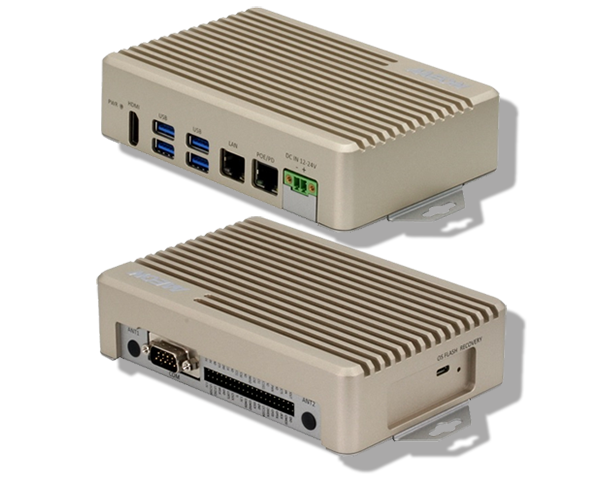 What are the Challenges? 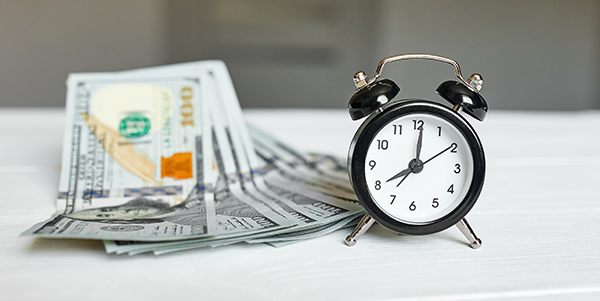 The infrastructure needed to build a retail location is significant and costly. Additionally, when factoring into this the need to ensure that any edge AI application infrastructure is accounted for in building plans, it is easy to see how logistically complex a task it is. The type of hardware deployed can affect the proposed layout of the store, along with numerous other considerations such as space required for foot traffic within the store, and the maintenance required for any of the application’s hardware components.

With respect to stores that already have a standard supermarket infrastructure in place, there can also be challenges, again depending on the type of application deployed and the company objective. Of the few examples of smart applications being deployed in the retail space so far, the biggest issues have been the time, financial cost, and disruption to business during installation. The principal root of these costs has been due to the installation of shelf-fitted weight sensors and PoE cameras, in addition to the effort of essentially recreating the store layout itself. 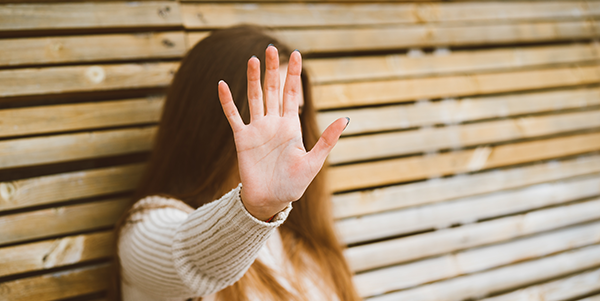 When it comes to the use of cameras in the retail sector, consumers have different levels of comfort, which are typically informed by the motivation behind the camera’s use, and how any data collected is managed. For example, the vast majority of consumers have no issues with the use of cameras in retail spaces for the purposes of security or theft prevention. However, if stores were using cameras to record and track individual’s spending habits, and not maintaining this data securely, there is little doubt that consumers would be unhappy.

This attitude is reflected in the legal approach of many countries to the issue of corporate entities data-handling obligations. For example, European Union countries are subject to the General Data Protection Regulation (GDPR), which provides strict rules on the collection, storage, and management of an individual’s personal data by both public and private institutions, while also requiring consent from customers to collect, store, or use their data in certain ways. As such, while utilizing cameras as an anti-theft measure is generally well accepted and permissible, biometric data being recorded unnecessarily would not be.

While one challenge to achieving a fully cashier-less store is how the deployment of the application will affect a store’s existing layout, this was not an issue for the multinational supermarket chain. To avoid unnecessary disruptions to day-to-day business, the store was instead retrofitted ‘overnight’ with the BOXER-8222AI, the USB cameras necessary to track items selected by customers, and a PoE switch control to provide energy efficiency. In addition to this, the minimally invasive hardware required for installation meant that the existing store layout remained relatively unperturbed. Therefore, the conversion of the store into a frictionless one did not disrupt the store’s business for an extended period of time.

The application’s effectiveness was due to the installation of a substantial number of ceiling-fitted USB cameras. One of the reasons for this choice was because USB cameras are significantly less expensive than using IP or PoE cameras, while also being less noticeable, resulting in a noninvasive atmosphere.

The versatile and compatible I/O of the BOXER-8222AI also provided ample options for multiple camera inputs per unit, with four USB 3.2 slots, and a Micro-USB for Flash OS, making the BOXER-8222AI a cost-effective choice. In addition to this, the retailer also saved on incremental electricity costs based on the power-efficiency of the Jetson Nano, coupled with the fact that the system was controlled by a PoE power device connected to the BOXER-8222AI’s PD LAN port.

A further reason for the use of USB cameras instead of either PoE cameras or in-built shelf sensors is that by retrofitting existing stores with an established application system (USB cameras powered by the BOXER-8222AI ), it would not affect existing store layouts, which if changed could alienate existing customers who have become accustomed to the familiarity of their local supermarket. Furthermore, the installation of shelf sensors would require a far more invasive approach, causing a more significant delay to the store’s business operations.

Given this smart retail application was deployed in a country bound by the EU’s General Data Protection Regulation 2016/679 (GDPR), the company in question built the application to be GDPR-compliant by design.

In using the BOXER-8222AI, they were able to take advantage of the Jetson Nano’s integrated NVIDIA Maxwell™ GPU architecture featuring 128 NVIDIA CUDA® cores. As a result, all data relating to an individual’s shopping was kept anonymous throughout the duration of the trip, with the footage caught by the USB cameras only displaying a ‘unique skeleton outline’, rather than footage of customers. To achieve this, the QR code scanned by the app when the customer entered assigned the customer an anonymized code, which is how the application identified each shopper, so any visual representation of individual shoppers did not contain personal identifiable information (PII) based on GDPR criteria.

Further to this, the application did not rely on facial recognition or biometric data, and retained only the relevant product data until the customer left the store. This means that the application focused on the products selected by the shopper, rather than anything about the individual themselves.

Due to the success of the initial frictionless supermarket, which attracted substantial praise for the sophistication of its functionality, the startup has subsequently expanded the technology’s reach to more brands across a number of countries.

By choosing AAEON’s BOXER-8222AI, the company was able to demonstrate the benefits of its edge AI application, while also showcasing their efficient and reliable model of retrofitting existing store layouts. Given the sheer size of some retail locations, the BOXER-8222AI’s low power consumption and I/O compatibility with the company’s frictionless hardware preferences, it appears likely that as smart retail begins to spread across the world, many large stores would likely choose this method over building smart stores from scratch.

As of 2022, the company had retrofitted stores for a number of the largest grocery retailers in the world, with operations extending from fully frictionless stores, to hybrid options, giving customers the choice between traditional and frictionless shopping.

For more information on the BOXER-8222AI
, please visit our product page

BOXER-8222AI
We use cookies to deliver our services and to provide you with a personalized experience. By using our services, you agree to our use of cookies.
×